You are here: Home › Azerbaijan › Chaotic and dangerous

Chaotic and dangerous. That, apparently is the condition of traffic riding into Baku. Actually I found that Azerbaijan…..ok…and Turkish….Men… Are chaotic and potentially dangerous. Riding into Baku was relatively easy, at least with Li’s expert navigational skills.
We have had mixed feelings in Azerbaijan. A days riding, the landscape, the weather, changes dramatically……beautifully. So too the towns and villages change dramatically, modern, clean, sparse, ancient, traditional……time honoured.
We cycle through one village, mostly women baking bread in tandoors on the side of the road….every 10 to 50 meters….the same produce, the same smiles, golden smiles, golden teeth. We are invited to cay, tea, pleasantly….by a woman.
Our first village….the men are excitable….excited….staring…..over familiar……we become…..to my standards, rude. We ignore…..move on…..ignore….move on. At one point, getting dark, middle of nowhere we hide behind a tree waiting for cars to pass and find camp. 5 men stop, approach…..I feel bad but it’s late, we are desperate for a safe camp, we ignore, move on. Angry, annoyed…..but mostly feeling unsafe. Hide and sleep in prickly thicket.
The landscape continues to entrance while we fly through towns wishing anonymity.
Our fourth night, the moon is almost full the sun just setting, I am in love with life, the scenery…..how romantic, a man cantering on horse back approaches us…….wanting sex. He goes and he comes again. We deliberate. We eat…..I the hungry cyclist can not eat…..throw away half my meal and pack up camp. In the dark we ride, we do not generally ride in the dark, but we ride to a cay house we spotted in the distance and we ask for refuge.
We are given a room, a dining room out the back, shown how to lock the room…..but the lock does not work. The men seem ok. We join them for drinks. In Azerbaijan you get vodka in 3 litre cardboard casks! I feel safe, the drinks can’t be spiked from a cask.
……and I can sport a shot gun….actually the men…..apparently police!….but I am not convinced, were very excited about their guns. Short of conversation I bought out our “point it” dictionary. Pictures of rabbit resulted in my journey to a car to inspect a gun…..more vodka, and time to shoot. We declined going hunting…..too tired , gesturing our bikes. More vodka, the car, the gun…….rather thrilling but in retrospect….. My, oh my…..if a car had been traveling in the guns path……photos. I note the cartridge taken from the gun, even in my drunken state…..I am aware and do not like the potential. Photos….. Man points at Li with the camera…..No…from me….No…..from man that owns the gun. No more pointing, I take and hold the presumably empty gun.
Bed…..too drunk…..hazy…..but I am sure one man enters the room…..ah…..a sleeping bag is not easy for another to enter…..slightly ashamed as I vomit….a room given freely. Man is angry, but no ideas of sex….. He hoses and destroys the carpet. We lock the room with our bike locks and drunkenly pass out.
In the morning we are asked to pay US$500 for cleaning. “I have no money” We are asked to pay $100. I ride a bicycle, I have no money. We leave and I am both angry that I messed up our free room, angry at myself, that I got , so, so drunk, and angry that even in supposed refuge, around men, we both feel so unsafe. My pepper spray cap is missing, but I was too drunk to remember where, or how? 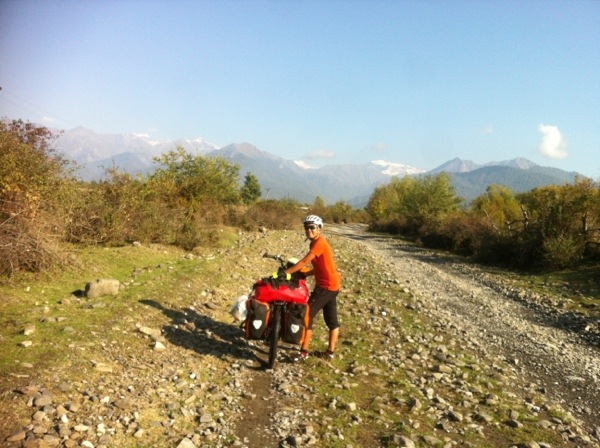 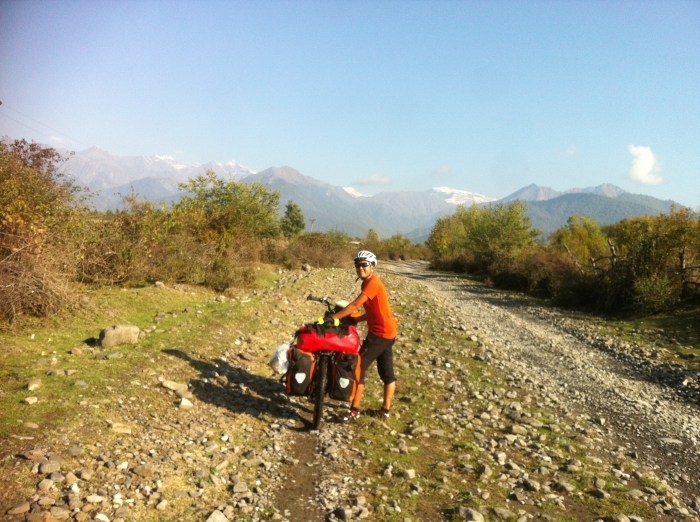 9 Responses to "Chaotic and dangerous"