You are here: Home › Bulgaria › Queen of rivers

While roughly planning a route from London to Australia we decided to follow the majestic Danube from it’s source in Donaueschingen, Germany, all the way to The Delta and Black Sea. There exists what is called the Danube Bike trail, the Euro velo 6, Danube Radweg, a documented and mostly sign posted route taking generally quieter roads, sometimes the only roads, off road tracks, dikes, all close to the Danube, Donau, Dunaj, Dunărea, Donava, Duna, Дунав, Dunav, Дунáй, Dunay. Her name changes slightly upon entering another country.
From Bulgaria we are no longer taking this route all the way to the Black Sea. We have not always stuck to the route, deviating just a few kilometres to hundreds of kilometres when it took our fancy…..or… as in Hungary, and then opting out of the Croatian section, due to flooding which forced us to search for higher ground. Even when we briefly rejoined the river, water from numerous countries was following, swallowing what was left of our trail in Southern Hungary. The locals, their own homes and corps threatened to be consumed within hours, ensured we found a safe path onwards.
Initially The Euro velo 6 was an invitation to gently enter our odyssey, not too much planning, no so many hills, a well worn path to find our selves, a warm up to what we envisaged would become difficult riding and navigation beyond Europe.
So we arrived in Donaueschingen…..to discover what looked like a large well, the source, the spring, that was not approachable as the concrete finery was hidden by scaffold. From here what was to become the Queen of rivers, gently flowed up and eastward….. at that point…. to me, a small meandering trickle, soon a stream.
Within a days ride she was a small river, slowly increasing in width, flow, a few more days and she was racing, swelling, actually bursting banks, not able to hold the rain that was often daily. By the time we were in Budapest the previous path we had ridden along the Danube was closed, underwater. We had left London just in time.
But she holds a lot of water, moves a lot of water and with each days ride she was more awesome, breath taking. In places she is more like a lake than a river, in places, damned, weirs and massive, massive hydro power stations, flat, slowed and industrial, forests, national parks, UNESCO sites, cutting out gorges, sometimes furious, queen. She is truly majestic.
We missed out upon a major part of the Euro velo 6 from near Passau to Vienna when we chose to cycle into the Czech Republic. Documented as the most popular and well worn path by cycle tourists of the 4 sections (Donaueschingen to Passau – Passau to Vienna- Vienna to Budspest- Budapest to The Delta) the first section had become increasingly busy as we neared the German Austrian border with us often seeing the same people for days at a time. When we rejoined the trail a days ride before Vienna we were shocked as the route became a virtual highway of cyclists, some loaded for the long haul, credit card tourers and the group tour and day trippers.
Apart from meeting a couple we had already met in Germany we saw no other cycle tourists in Hungary and no more until 2 solo men tourists on the same day in Romania.
Sign posting of the route was satisfactory, sometimes excellent, sometimes vandalised, ill thought out or confusing due to name changes, but satisfactory to navigate without maps or without requiring the 4 heavy bike trail booklets. Sign posting became non existent in Romania and Bulgaria and we had prepared with the final booklet.
Our second day in Bulgaria I felt emotional leaving the Queen as she less and less frequently dipped out of view as we proceeded south east. We were ready to leave her, no longer following a well worn path, in full, proceed towards our own journey, own route, own stories. Thankful to the Queen of rivers that we learnt, experienced, strayed, and grew……… 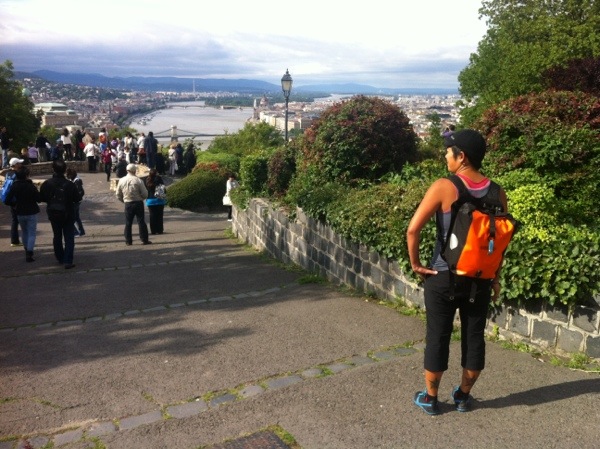