Since April in France we have followed numerous canals and rivers, and apart from the trickles at source….without exception all of the water ways have been swollen, close to bursting and fast flowing, many already submerging park benches and low lying trees.

We have pretty much followed the Danube River, the mighty queen of rivers from its source in Donaueschingen in Germany to Budapest, Hungary. We took a slightly large detour and deviated near Passau heading up to Prague and then back south, rejoining the Danube nearing Vienna. Heading up to Prague we also attempted to follow the Vlatava River.

The Vltava left us speechless, 3 days pedal from where we joined it at lake Lipno in the Czech Republic. It begun as a small river, a stones throw to the opposite bank. Cycle touring you don’t actually see the river that often, even when following its general course. Busy roads, hills, towns, forests, all obscure its view. We had not seen water for 3 days of pedalling when somewhere near the Vltava we came to a bridge and were to cross to the other side. In maybe 150km the small river had become immense, the bridge a few kilometres long with the wide fast flowing river far below. The following day it joined a beautiful, scenic lake we had the pleasure of camping besides, and river again and then the fast flowing river that we left behind and that has apparently now submerged many areas of Prague.

Back on the Danube, just before Vienna, huge power stations and appearing more like a lake, this river is awesome. The station humming like whale song. And the river, its flowing fast. I was impressed by the size it had become way back in Passau where it was joined with the rivers Ilz and Inn. Back then we were moved from our camp site to high ground after a phone call to the site explaining water was coming. The Danube it is bigger than I could have imagined, is not at all like the small stream we chose to follow well over a month ago.

Our route, the Euro Velo 6 which follows the Danube from start to finish is closed with much of where we have already been reported as underwater. We left Budapest as the route we briefly inspected on June 5th was close to being submerged and then underwater on June 6th. The water is rising and expecting to peak at about 9 meters on 10th or 11th.

As the river rises we have ridden in circles, zig zagging the major roads that without warning throw up signage prohibiting bicycles. Neither the major book shop or petrol stations have had maps and our only map being suitable for submarines at present. We briefly decided to skip Croatia and Serbia heading for hills in Romania however, until we chose to ignore the signage we are pretty much stuck. Today we head back south and the unknown, will keep our distance from the river but head in that general direction. If needs be we will help with sand bags or shifting mud as its time to keep on moving. 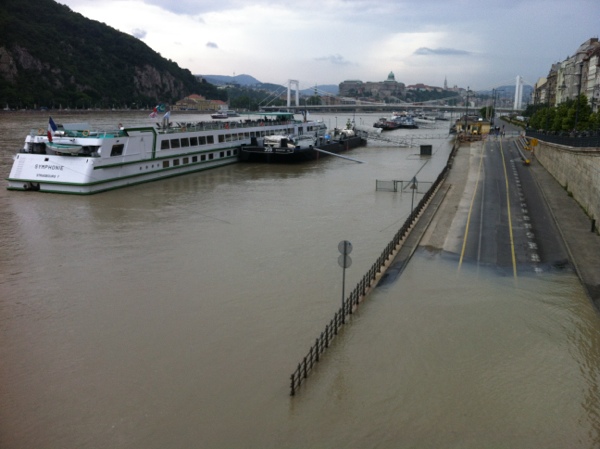