You are here: Home › Guests and Hosts › Lightening and tailwinds.

I really thought it was a myth. Over 2 months on the road and and as the temperature has risen we have been plagued with other weather conditions, if not rain, the damn head wind to sap our energy and pace.
Day 80 on the road was to be our final day in Hungary. In a few days we traveled over 100 kilometres off route weaving and crisscrossing the region trying to head south east without a map, diverted by the devastating flooding and then major roads inaccessible by bike.
The minor roads proved scenic, incredibly flat, taking us past unexpected warning signs for land mines, diverse farm land and crops, locals on rusting bicycles and incredibly friendly people adamant on helping us.
We had 20 kilometres remaining before calling it a day just short of the Serbian border, just finished a late lunch and again hit the saddle. And the wind….and black moody storm clouds came out of nowhere. It had been a beautiful day, still and 30 degrees. Perfect cycling while quenching our thirst between water, then beer.
The wind came with such ferocity we briefly contemplated returning to the last town to stay the night. But we pedalled on…..and then….the wind that for all appearances was blowing sideways, always a battle on shared roads…..was in fact….a tailwind. Something of legend. Stories to keep cyclists pushing onward, in hope when every muscle, the mind wanes. We had not experienced such a wind for more than seconds, teasing on hard stretches, before returning, changing back, head on and often unrelenting in its torment.
But on day 80 as we decided to push on, myth became reality, fierce, strong pushing us onward, exhilarating and fast. I rode until I hurt all over, enjoying the help of nature, enjoying our speed despite a heavy load. We flew and Li did not complain as my tires flung ripe, red berries upon her, her bike, behind me. The wind lasted for only 10 kilometres, Li looking battle scarred and bloody due to the juice of wind scattered fruit, but she looked jubilant and we stopped and rested and watched a storm approach.
The final 10 kilometres we cycled again into a head wind. The clouds shifting, dancing, rumbling of thunder, downpours, sun patches…..and lightening every few minutes, at times intervals of seconds, and we were riding right into it, but also our refuge.
There was only flat farm land, low trees along the road and no prospect of cover. We had been preparing ourselves for the risks of flooding, land mines, wild animals, even people, but lightening never crossed our minds…..and we were a wee scared. We pedalled harder, aware we were approaching the strikes that filled the sky, but also buildings and shelter. We skidded to a stop, gravel, a bar and quickly moved inside. And the storm stopped, disappeared as quickly as it arrived. Bathed the town, Bacsalmas, in temperamental but glorious light.
Thank you to the strangers, no longer strangers, that welcomed us to Bacsalmas, free beer, then the local spirit, palinka, and people stopping to help, escorting us to the “Panzio” our final night and farewell to Hungary. 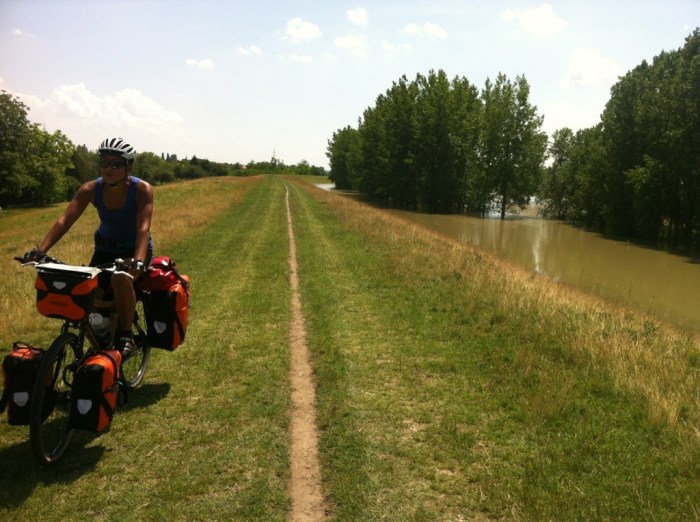 One Response to "Lightening and tailwinds."