Camping in the grounds of a petrol station, close to Ihlara Valley in Turkey we wake at 5.30am planning to ride in during the coolness of the morning. The earlier perhaps the more atmospheric the light for what we assume will be spectacular.
The valley was recommended as the slightly less touristic beginnings of Cappadocia. Images we have seen display fantasy like rock formations with cave dwellings and churches carved within, habituated since the Bronze age peaking during the Byzantine era.
I am prepared to be disappointed. I am sure this is worth our very large detour, but often it has been the unexpected, the un researched, that has truly moved and inspired me during this journey. The tourist trail has not been what either of us frequently want, becoming sterile, rushed and like a theme park.
10 minutes into our ride……I am so wrong! I begin to witness, to feel, the unimaginable. This is a real fairy tale. We pass a cave village, with an old town, pockmarked, carved into the mountain, from its peak down to the newly, not so very new, old village of stone habituated houses below.
I become a very effective bug catcher, my mouth does not close, on and off the bicycle taking pictures that will never capture what must be discovered in person. This is a place worth visiting, a place that must be visited. We have not even passed the gateway to the Valley, the promises to come.
At the gateway and first cathedral carved into the rock we chose to ditch the bikes, set up camp and walk the valley by foot. For the first 7 kilometres we only see 2 tourists, the odd farmer, shepherds and cattle. A stream runs through, as beautiful as the formations above. Fresh and fertile and cool with shaded canopy. We can enter the caves at whim, there are so many…..and then of course, some are so high above, unreachable, except to the imagination.
The “best” part of the valley follows….perhaps noted by others as best due to the multitude of churches at close intervals, Byzantine frescos still relatively intact despite visitors being able to access them so freely, and heartbreakingly, graffiti them at will. For such a remarkable place the tourists are very limited and the few restaurants are tastefully located on poles above the running stream, adorned with Turkish carpets. Ducks approach, goats are milked and sheep are herded by. This would be a great theme park, a model for the tack that people take home trying to hold on to the magical. 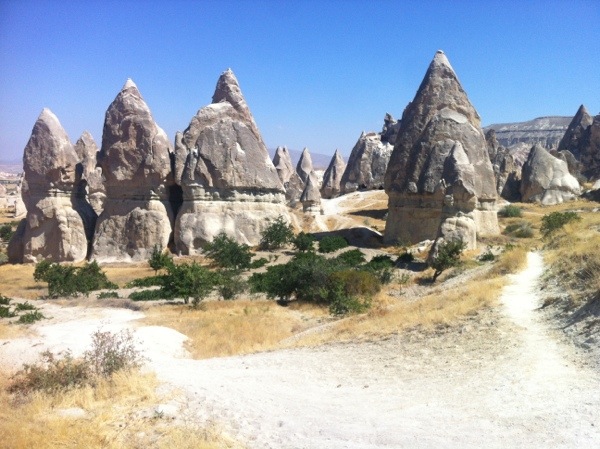 One Response to "Ihlara Valley Turkey"