We were chased by dogs to the Romanian checkpoint, then with a trouble free wave we were through and onto the ferry. Zimnicea is the border crossing with Bulgaria that is generally used by trucks. There was one truck, one car, 2 foot passengers and us, being 2 bicycles, I considered us the majority. The truck driver warned us about people in Bulgaria, warned us about the hills, warned us about Iran and informed us of the hospitality of Turkey, where he was from.
45 minutes later we were on the other side, quick check of the passports before negotiating the 2 backwards speeding forklifts and over head crane scooping up dust all around us. I could not actually see anything being moved from point a to b just a chaotic, fast moving hazard in our gateway to Bulgaria, and more alarming than the dogs.
Country number 10 and our last in Europe we decided to get a cheap hotel, get some Bulgarian lev, wifi and find our bearings. This has generally been our routine in new countries since the Euro is no longer the currency. Li had found a reasonably good priced hotel, but without a map and no Bulgarian language proved difficult in the hilly town. Not so difficult as despite the language barrier people were very helpful and 45 minutes later we were unloaded and sitting down to some Bulgarian cuisine. Moussaka and a baked dish of chicken, fresh herbs and flavoursome potatoes cooked in the juices. Then the owner and his daughters brought us home made, freshly caught fish cakes and custard, fruit filled tarts, just because we “should try”.
This was not the only gift of food we received in Bulgaria. The next day on the road stopping for pastries and beer and refuge from the sun, some people having a meal in memory of a relative brought us a plate of delicious, small fried fish.
We camped the next evening, first stumbling upon an old quarry that appeared deserted and perfect for stealth and privacy. We then noted at the back of the clearing, a man built tunnel, that appeared sound, but too clean. Not convinced someone was living there we continued our search up a hill into the forest. Rubbish everywhere…..this was to be my only dislike, sadness , for the rural Bulgarian country side, the forests, rivers and frequent fresh water fountains along the way.
Finding camping spots proved easy everywhere before the Black Sea coast, with the scenery often breathtaking…..breathtaking but not like cycling a bicycle up the continuous hills.
Sunny Beach was a culture shock to us, high rises, resorts and bars that we had to negotiate before glimpsing the sea.
Then Burgas, with heavier traffic, hazardous road works, no need to cordon off gaping holes that sprang out of no where, at least there was road works for Bulgarian roads to me, are the worst to date.
There were potholes like giant bites out of the side of some roads, almost a foot deep. pot holes and crazing of the bitumen, sand and gravel washed into bends. Then there were the perfect looking roads that I called “fly paper”, sticky to catch a cyclist so that despite no head wind, we had to pedal with all our might. On steep descents we could easily come to a stand still, no rolling, no blessing of gravity.
The truck driver was right about the hills, but the people, we had no problems, only help and generosity. 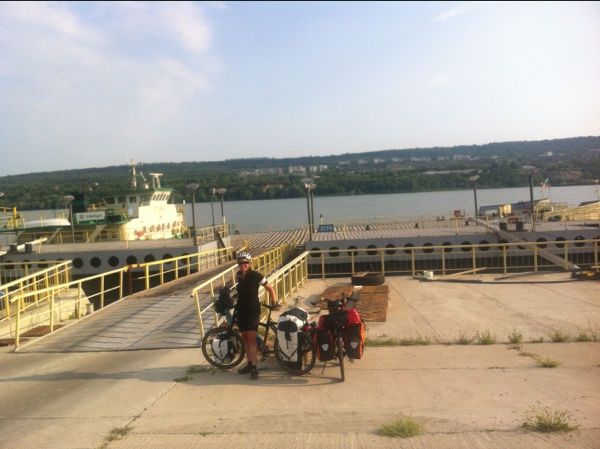 One Response to "Bulgaria"